Avascular necrosis (AVN) literally translates to “death caused by no blood supply”. In this case, death is of the bone making up the femoral head of the hip joint (AVN can also affect the knee and the proximal humerus of the shoulder, most commonly). AVN of the femoral head (also termed “hip osteonecrosis”) is a pathologic process that results from interruption of blood supply to the bone. AVN of the hip is poorly understood, but this process is the final common pathway of traumatic or nontraumatic factors that compromise the already precarious circulation and blood supply of the proximal femur. The condition is more common in males and accounts for roughly 10% of all total hip arthroplasties performed each year. In 80% of patients, both hips are involved, with approximately 3% having “multifocal” disease, meaning that AVN also affects other parts of the body. 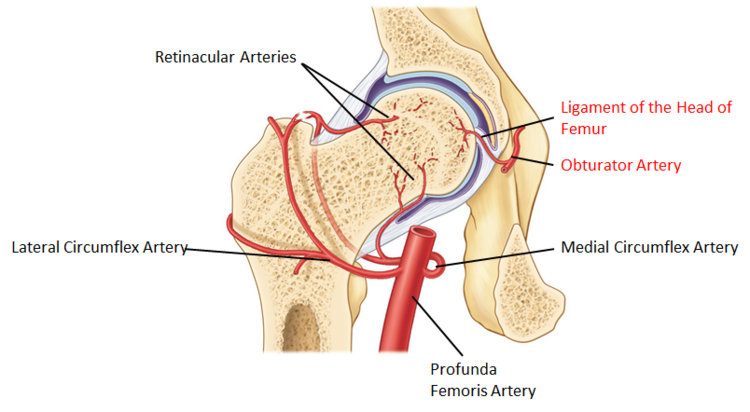 The risk factors for developing AVN are divided into direct and indirect causes.

Patients typically present with insidious onset of hip and anterior groin pain that is worse with activity. As mentioned above, the disease is bilateral is approximately 80% of cases, so patients often complain of similar symptoms in the contralateral hip. If left untreated, the disease progresses in a predictable fashion through six stages, culminating in advanced osteoarthritis typically requiring joint replacement. In order to prevent to requirement for joint replacement, the disease needs to be treated in the “pre-collapse” stages.

The progression of AVN in the femoral head is classified according to the Steinberg Classification (a modification of the original Ficat and Arlet classification). The disease progresses through six distinct stages, terminating with advanced degeneration and osteoarthritis of the hip joint. 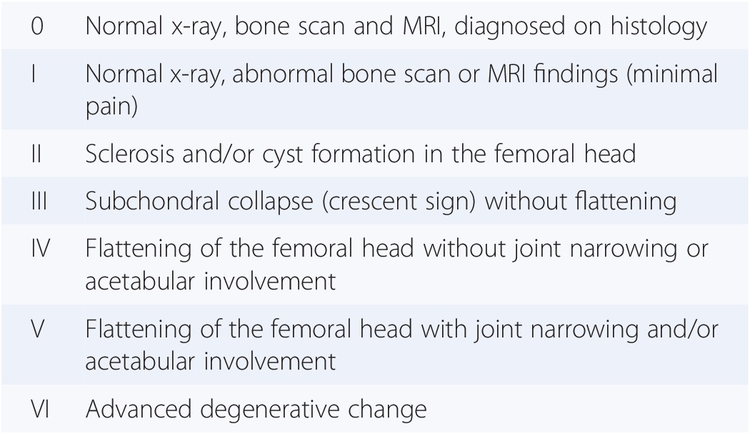 Steinberg Classification of AVN of the hip (a modification of the Ficat and Arlet classification). AVN progress through six stages, culminating in advanced osteoarthritis of the joint (Stage VI) if left untreated.

Ideally, AVN of the hip is recognized and treated before Stage III (subchondral collapse of the bone). Core decompression can help prevent the progression of the disease to advanced osteoarthritis.

Bisphosphonates have shown to be effective in treating “pre-collapse” AVN (Stages 0 to II), as shown in this study by Lee et al:

The use of alendronate to prevent early collapse of the femoral head in patients with nontraumatic osteonecrosis. A randomized clinical study.

However,  new literature seems to cast doubt on the efficacy of bisphosphonate treatment in pre-collapse AVN with medium to large lesions. The authors suggest that the reported success seen in treating smaller lesions might be due to the natural history of these lesions which often do not progress to collapse even in the absence of any treatment.

Various surgical options are available for the treatment of AVN. The treatment is largely dictated by the stage of the disease. For early AVN, prior to collapse of the femoral head, core decompression with bone grafting has become the treatment of choice.  In core decompression, Dr. Dold uses a drill to remove diseased tissue from inside the femoral head. This procedure relieves pressure within the femoral head, increasing blood flow and allowing new vessels to form. As an augment to this procedure and a step to replace the diseased tissue in order to support the cartilage layer of the head, a bone graft is combined with the patient’s own mesenchymal stem cells (derived from their bone marrow during surgery and concentrated to induce a regenerative effect in the bone) and delivered directly into the femoral head. The procedure is done through a small incision in the lateral aspect of the thigh. 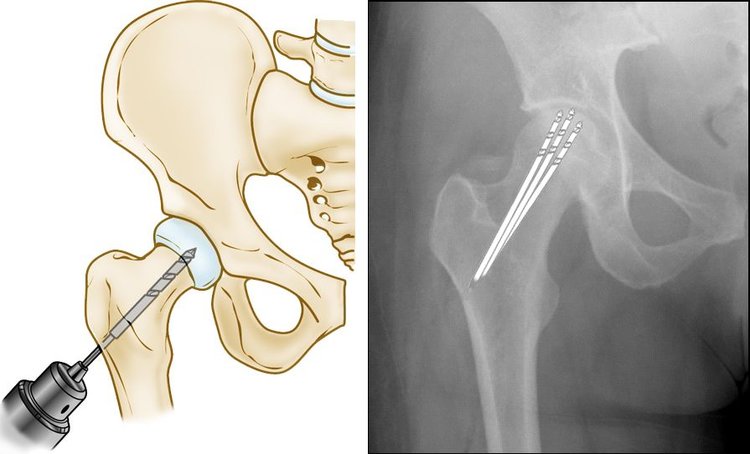 Core Decompression of the femoral head aims to relieve pressure within the head, allowing for re-vascularization of the diseased bone.

Once AVN has progressed to advanced osteoarthritis, the disease is considered irreversible and typical requires a hip replacement. Ideally, AVN is diagnosed and appropriately treated in the early stages to prevent the need for a hip replacement.

Dr. Dold currently treats patient suffering from AVN of the hip through a novel technique utilizing core decompression and mesenchymal stem cell transplantation to regenerate normal tissue. If you are suffering from AVN, please contact our office for an appointment.

Osteonecrosis of the Femoral Head. Orthop Clin North Am 2019.

Core decompression for early osteonecrosis of the hip in high risk patients. (CORR 1997).

Surface replacement hemiarthroplasty for the treatment of osteonecrosis of the femoral head. (JBJS 1998).

Osteonecrosis of the humeral head treated by core decompression. (CORR 1998).

Survivorship analysis of hips treated with core decompression for nontraumatic osteonecrosis of the femoral head. (JBJS 1999).

Cementoplasty in the treatment of avascular necrosis of the hip. (J Rheumatol 2009).

Staging of hip avascular necrosis: is there a need for DWI? (Acta Radiol 2011). 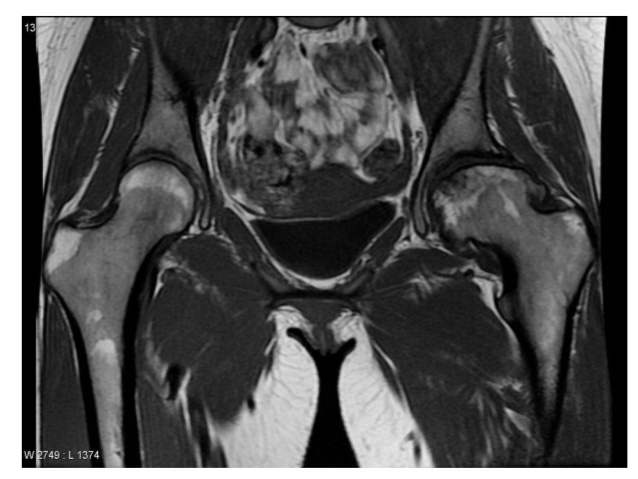 An MRI showing advanced AVN of the patient’s left hip. You can easily see the difference between the two hips, with the left hip showing loss of sphericity and collapse/flattening of the femoral head.

Conditions of the Pelvis and Surrounding Areas: