*The term “cam” comes from camshaft, where the cam is attached to a cylinder (think: femoral neck), creating a cylinder with a rotating irregular shape. (Link)

*The term “pincer” is more self-explanatory, in that the abnormal anatomy resembles a crab’s claw.

The proximal femur and acetabulum typically articulate without abutment through a physiologic range of motion (ROM). However, the required ROM differs from patient to patient, depending on their activity, and the ROM will be dependant and related to the boney native anatomy of the hip. A sedentary patient will require less range of motion, whereas an extreme range of motion might be required for activities such as dance, ballet, and ice hockey, for example. Normally, the acetabulum is anteverted 12 to 16.5 degrees and covers the femoral head to a depth that avoids both impingement (overcoverage) and instability (dysplasia or undercoverage) with a horizontal, thin sourcil (the weight bearing zone). The proximal femur normally has a spherical, concave head-neck contour and appropriate offset between the head and neck that allows for impingement-free ROM. Typically, the angle of the femoral neck-shaft angle is 120 to 135 degrees, and the femoral neck is normally anteverted 12 to 15 degrees. As mentioned above, the rim of the boney acetabular cup is lined by a fibrocartilaginous structure called the labrum (similar to the glenoid labrum of the shoulder). The acetabular labrum functions to create a fluid pressurization seal with the femoral head. It also occurs in continuity with the articular cartilage liner of the joint. As a result, tears of the acetabular labrum eventually begin to extend into the cartilage lining the joint, resulting in “chondral delamination” of the joint and, eventually, osteoarthritis.

A. Pincer-type Impingement: Contact between the abnormal acetabular rim and femoral head-neck junction.

A pincer lesion is usually the result of a deep acetabulum (coxa profunda), focal anterior overcoverage, acetabular retroversion, or, less commonly, posterior overcoverage. This leads to labral bruising and degenerative tearing which may ultimately result in ossification of the labrum and a contrecoup posterior acetabular chondral injury. Pincer-type impingement is predominantly found in middle aged women.

C. Mixed- or Combined-Type Impingement: The most common form of FAI involves a combination of BOTH cam and pincer lesions, creating an abnormal articulation between the acetabular rim and the femoral head-neck junction.

There is no known evidence that confirms that a patient with untreated FAI will undoubtedly develop osteoarthritis, due largely to a paucity of longitudinal long-term data. However, clinical correlation with over 600 surgical dislocations of the hip in patients with FAI has depicted a strong association of this disorder with progressive acetabular chondral degeneration, acetabular labral tears, and progressive osteoarthritis of the joint. Patient with symptomatic FAI will, however, develop a progressive chondral and labral injury which could then lead to progressive osteoarthritis of the joint, if left untreated and allowed to progress. One population study suggests that there is a 15% to 19% prevalence of a deep acetabular socket (pincer lesion) and a 5% to 19% prevalence of pistol grip deformity (cam lesion) of the hip. This population had a relative risk ratio of developing hip osteoarthritis of 2.2 to 2.4, illustrating the association between FAI boney abnormalities and arthritis.

It is well known that there is a high prevalence of FAI imaging findings in asymptomatic patients (Arthroscopy 2015, Euro J Radiol 2016, AJSM 2015). This should emphasize the importance of both the patient history and physical examination in overall assessment of the patient.

Typically, patients are young to middle aged and present with a variety of symptoms ranging from predominantly anterior groin pain to lower back or buttock pain. Anterior groin pain is the most common presenting symptom. The symptoms are typically aggravated by activities such as running, skating, yoga, sitting for extended periods of time, standing up from a seated position, putting socks and shoes on, sitting with legs crossed, and getting in and out of vehicles. Patients often complain that their symptoms are beginning to affect their sleep at night and not being able to get into a comfortable position in bed, often resulting to sleeping with a  pillow between their legs (a pillow between your legs will help prevent the adducted, internally rotated position that typically worsens FAI symptoms and anterior groin pain). Symptoms may also be present or mild in the contralateral hip. Patients have often been (mis)diagnosed with other conditions such as chronic lower back pathology, hip flexor strains, and sports hernias/athletic pubalgia and may have had past surgeries for pain relief, often misdiagnosing or completely missing their pathologic hip condition.

This study by Clohisy et al (CORR 2009) illustrates the variety of presenting symptoms in patients with symptomatic FAI and some of the common dilemmas of misdiagnosed hip pain in patients suffering from FAI: “The average patient age was 35 years and 57% were male. Symptom onset was commonly insidious (65%) and activity-related. Pain occurred predominantly in the groin (83%). The mean time from symptom onset to definitive diagnosis was 3.1 years. Patients were evaluated by an average 4.2 healthcare providers prior to diagnosis and inaccurate diagnoses were common. Thirteen percent had unsuccessful surgery at another anatomic site. On exam, 88% of the hips were painful with the anterior impingement test. Hip flexion and internal rotation in flexion were limited to an average 97 degrees and 9 degrees, respectively. The patients were relatively active, yet demonstrated restrictions of function and overall health. 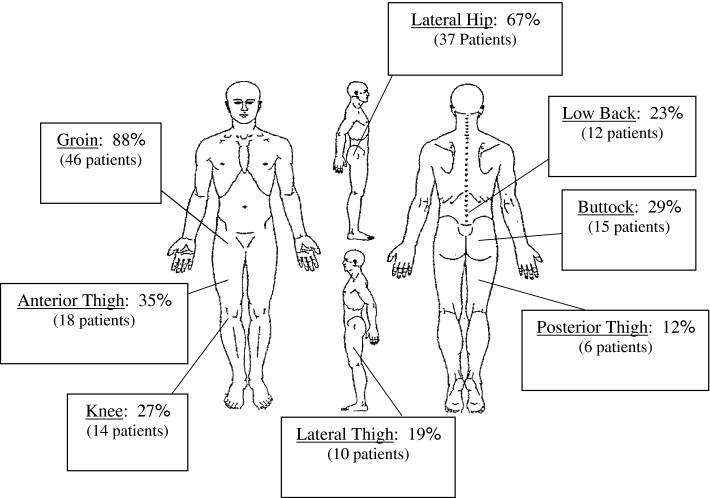 The physical examination is critical in the diagnosis of FAI, which aims to classify the subtype of impingement through a series of tests that exacerbate the patient’s symptoms by putting the hip into vulnerable positions and motions that may reproduce the impingement, causing discomfort.

Radiographs (X-rays) should be taken of the anteroposterior (AP) pelvis, a frog-leg lateral, 45-degree and 90-degree modified Dunn views, and false-profile view.

An MRI (Magnetic Resonance Imaging) or MR-Arthrogram may be ordered to evaluate the following:

A Three-Dimensional CT Scan can be helpful in order to:

Nonoperative management approach to FAI included stretching, activity modification, and physical therapy focusing on core and abduction strengthening and ROM. Other options include medications such as anti-inflammatories and analgesics. Intra-articular hip injections are aimed to decrease inflammation within the joint rather than cure the underlying pathology, and may include corticosteroids, platelet-rich plasma (PRP), or mesenchymal stem cells (BMAC).

The primary indication for surgery in FAI is failure of a course of conservative management and exacerbation and progression of symptoms despite conservative management. Dr. Dold treats FAI through hip arthroscopy, utilizing 2 to 3 keyhole incisions around the hip. An arthroscope is utilize to visualize the joint pathology, while small instruments are used to remove the boney lesions and repair the acetabular labrum.

To set up a hip consultation with Dr. Dold, click here.

Conditions of the Pelvis and Surrounding Areas: